The Dean, Faculty of Technology, OAU, Professor Adesola Aderounmu, in a message to TechEconomy.ng, said that ‘The IfeMask’, as code named, is a wholly locally designed, developed and produced nose mask by the World Bank sponsored OAU ICT-Driven Knowledge Park (OAK-Park). 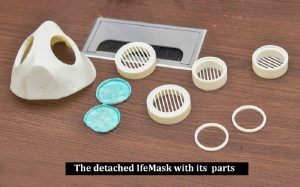 According to Prof. Aderounmu, the immediate past president of the Nigeria Computer Society, “The mask is unique. It draws its uniqueness in its durability, reusability and comfortability. The reinforced rubber material and acrylic painted body makes it possible to be washed and decontaminate after each use. The mask does not change shape on reuse and is comfortable to wear”.

Read the original story from www.techeconomgy.ng. Sandia National Laboratories, the engineering science and technology laboratory for the U.S. Department of Energy, has been collaborating with the Cyber Policy Studies at a the Center for Assurance Research and Engineering (CARE) at George Mason University. The intent is to produce capabilities that enable the U.S. government to better understand and anticipate the effect of various forms of messaging on societies. Specifically, this collaboration is intended to develop a research and development effort that exploits academic studies, along with socio-behavioral, economic, and geopolitical data that is coupled with geopolitical computational models to explore such things as how different types of messaging by state and non-state adversarial groups, can influence various populations. This effort also seeks to better understand how different communication domains can ultimately affect behaviors within various societies. This can be applied to hard security, human security / crisis management, and intelligence domains.

Registration is free, but required at https://wvcyberworkshop.wvnet.edu/

About the Workshop: The objective of the West Virginia Local and State Government Election Security and Cybersecurity Workshop is to further awareness and foster dialog on West Virginia state and local government election administration, as well as planning for the May 12th Primary and November 3rd General 2020 elections.  The workshop will consider the complete election cycle from pre-election, election day to post-election from the perspectives of all stakeholders in the election ecosystem, including citizens, state and local government officials, technical and IT staff, third party technology companies, DHS and CISA, U.S. government agencies and law enforcement.   The workshop will address “who to turn to” in different circumstances and contingencies.  In addition, the workshop will review the recent West Virginia Senate Bill 94 – “Providing persons with physical disabilities ability to vote by electronic absentee ballot”.

The Mason-NSF project has co-hosted nine successful local and state government cybersecurity partnership workshops in Virginia and West Virginia and including Kentucky and Ohio between 2017 and 2020.

Registration is free, but required at https://wvcyberworkshop.wvnet.edu/ .

The Mason-NSF project has co-hosted seven successful local government cybersecurity partnership workshops in Virginia and West Virginia between 2017 and 2019.

The Central African Republic (CAR) Technology Entrepreneurship and ICT Leadership Accelerator for start-up and early stage technology company founders and managers in the Bangui region has the goals of assisting and mentoring early stage company founders and managers to increase their potential for building successful and viable businesses and furthering their overall ICT leadership capacity.   In addition, the Accelerator’s goals include contributing to fostering a culture of entrepreneurship in Bangui and Central African Republic and developing a network of technology entrepreneurs.

Funded by the U.S. Department of State, the project partners are George Mason University, the University of Bangui and recent Humphrey Fellow and Central African Republic technology executive Serge Adouaka. Mr. Adouaka was a Humphrey Fellow in 2018 – 2019 studying at the Maxwell School at Syracuse University and then doing his professional affiliation with us at George Mason and focusing his study on ICT for Development and the Central African Republic.

The initial pilot will be comprised of two classes of 20 to 25 technology related business founders and managers with an initial one to two day kickoff at the University of Bangui and then subsequent weekly virtual engagement over the course of three months during the spring and summer of 2021.   The curricula is based upon best practices in CIO and technology leadership programs and experiences of Africa based technology accelerators.

Service and consulting company in New Information and Communication Technologies. Founded in 2020 by Salim BADAMASSY, information systems engineer, Satcom Consulting is supported by a […]

The digital incubator was created in 2015 to offer digital solutions to the Central African population, the government and development partners. It is a physical […] A single-member limited liability company, was created in 2015 to fight unemployment and promote digital transformation. It aims to support local companies to outsource certain […] Forever Management Technology (FORMATECH – SURL) is a one-person limited liability company. It is specialized in the provision of services, training, studies and realization in […] GETEX AGRI was created on July 1, 2020 by Ursula Marlène Makoua GERVIL-YAMBALA, passionate and self-taught about agriculture. GETEX AGRI is part of GETEX GROUP […] Company Description, Overview and History  Created in 2019 by several entrepreneurs whose objective is to innovate the agricultural system and meet the need for food […]

The company – including its overview / Company history and founders  Founded in 2018 by Bachir MOUSSA BAWA serial entrepreneur, with the aim of providing […] In the Central African Republic (CAR), successive conflicts have weakened the health system. Health indicators are among the worst in the world. The situation of […]

During the three months the founders and managers will develop plans to strengthen their businesses and further their individual technology leadership abilities.  The program will conclude with a final day of presentations and discussion at the University of Bangui. The weekly engagement during the three months of the program between the launch and the conclusion will be SMS based.

Design
The courses are multidisciplinary, covering leadership and management, technical and engineering and policy.

The course provides an introduction and overview of the changing nature of cybersecurity risk management and cybersecurity governance.

This course provides an introduction and overview of the rapidly changing enterprise mobility environment, associated cybersecurity risks and approaches for developing a mobile cybersecurity strategy.

Cybersecurity Innovation Forum at George Mason University, is a local Meetup group sponsored by CARE and School of Business. The group meet several times a year and feature a series of 15-minute case study presentations by cybersecurity experts and technology innovators followed by a panel discussion and questions. The focus of the meetings is on cybersecurity innovation including innovation rationale and motivation, technology, metrics and lessons learned.

Sign up our Meetup Group and check out the next event here- https://www.meetup.com/Cybersecurity-Innovation-Forum/